In the last week alone, two children have been bitten by rattlesnakes in northern California. One in the Bay Area, and other here more locally in Folsom, along a walk/bike trail. Bites to children are common unfortunately due to them not quite knowing what to look for, thus more commonly stepping on or accidentally reaching for snakes. It’s important to teach children when they’re of learning age about snakes, what they look like, where they like to hide, and other information of the sort that’s easy for kids to understand. Perhaps have them avoid stepping on what look may look like sticks or other elongated objects that may not be what they seem. In addition, having kids be aware of where they put their hands is also big. Kids love to pick up odd objects and inspect them, and thus a lot of bites occur to the hands when an interesting object turns out to be a rattlesnake.

With all of that said, all of the attention regarding these snakebites has brought a lot of negative press against snakes, in-general. Rattlesnakes don’t “attack”, as far too many media outlets report. They defend themselves in the only few ways they can: 1). move away, 2). rattle/make themselves known, and 3), if all else fails, bite. Sometimes number three is the first thing that happens, though. Most commonly, when a snake is stepped on or grabbed. When a snake is stepped on or grabbed for, rattling won’t help since they think the big creature stepping on or reaching for them is there to harm/kill them. Escape is also usually out of the question, especially if they’re being stepped on. Sometimes, if you’re reaching for/inadvertently toward a rattlesnake, they may sit still or try to crawl away. But if you’ve grabbed one, it’ll likely try to bite you so you drop it, then allowing it to leave.

Here’s a breakdown of snake bites, defense, and some myths/negative mindsets that are unfortunately rampant now-a-days.

1). According to what I’ve heard/read, the child accidentally stepped on the snake while walking on a walkway along a greenbelt. This is how the majority of bites occur, as juvenile rattlesnakes can certainly look like little sticks if not inspected closely. Rattlesnakes don’t viciously attack or anything of the sort, but when stepped on they’re automatic reaction is to bite what’s pressing down on them to keep them from pressing down harder.

2). Juvenile rattlesnakes are no more dangerous than adults. Even if juveniles had more “concentrated” venom, it’s only to make up for the lack of bigger venom glands, and the bite of a juvenile, even if it squeezed all the venom it had in a bite, is minuscule to what an adult may be able to deliver in one bite just due to the sheer size difference. 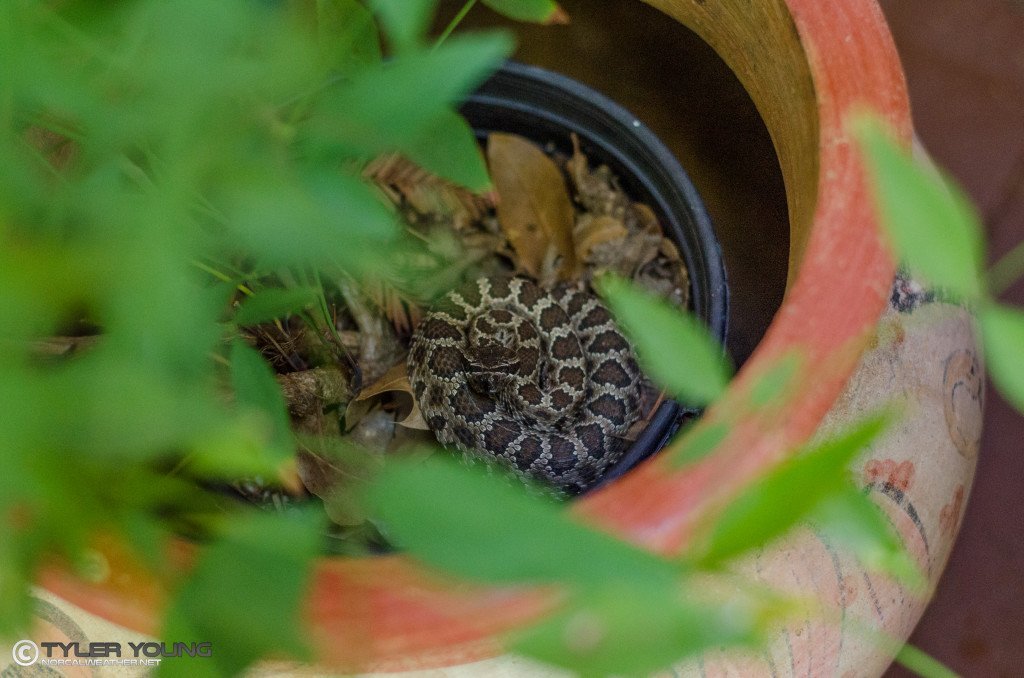 A juvenile rattlesnake that crawled its way into a flower pot in Loomis.

3). “The only good snake is a dead snake”. No, no, no. This is a really common mindset with people, and it’s very unfortunate. Without snakes, rodents would be a much bigger problem in areas they may not be. Snakes don’t carry many diseases that transfer to humans besides perhaps salmonella (and other similar bacteria), and you’d essentially have to grab a snake and lick your hands/rub your eyeballs to have problems. You don’t have to pick up a rat to get sick, as their droppings can contain all sorts of bacteria and viruses, such as the hantavirus, plague, hemorrhagic fever, and many more. Snakes aren’t around to hurt people (unless you live somewhere with massive constrictors, which we don’t have, and the snake would have to be utterly massive to consume a human anyway), they try to avoid people as much as they can, especially rattlesnakes. Rattlesnakes are one of the more secretive snakes we’ve got native to our area, and only wander out when they really need something or if conditions are perfectly favorable (not too hot, not too cold).

A lot of people don’t realize all the good snakes do because they have snakes around, but if if they were to be slaughtered, I’m sure you’d notice rodents become more abundant without a significant natural predator there to naturally control the populations. Snake populations

don’t generally get overpopulated. Snakes themselves have a lot of predators, as with most other animals. Hawks and other large/predatory birds love snakes. So do coyotes, and other larger/carnivorous mammals. Snakes also have to have a fair amount of prey and places to hide for them to thrive, and when drought arrives food and water becomes harder to find for most/if not all animals, which can cause desperation to seek food and water, making them easy targets and susceptible to starvation and sickness. Rodents typically do alright, because they’re hard to simply kill by yourself. A snake on the otherhand is an easy target for us, unfortunately for them.

4). When/if bit, as you’ve probably heard by now, don’t cut the wound, tie up the limb, use a suction device, or anything of the sort. Call 911 to get transported to the nearest hospital. If on a remote hiking trail or very remote location, a helicopter evacuation may be needed – but time is key to treatment to a snake bite.