While it’s cooler and showery today as of March 11th, previous days have been quite warm for this time of year and supportive of daily snake activity. Temperatures have hovered in the mid to upper 70s over the last week, with these temperatures quickly returning returning by tomorrow into the foreseeable future. This time of year, especially with these favorable temperatures, support rattlesnakes beginning to awaken from their winter sleep-state, and start peaking out and enjoying some sun, but in general remaining near the den, because overnight temperatures are still relatively cool (40s to low 50s for the most part recently). This week, I was out on a call in Granite Bay (the Lakeshore Drive area), in which the home owner had disturbed a rattlesnake in a wood pile in a barn. I arrived and began moving the wood out, and discovered more than one rattlesnake using this wood pile inside the barn as a prime winter hibernation spot. The barn had kept the wood pile and the snakes inside the pile dry, and the well-layered wood pile kept the snakes from freezing. I did discover one that didn’t make it, but it didn’t look like it died of exposure; it was likely a shift in the wood pile that mortally injured or trapped the snake, or, someone moved some of the wood and caused the same unfortunate issue to occur. 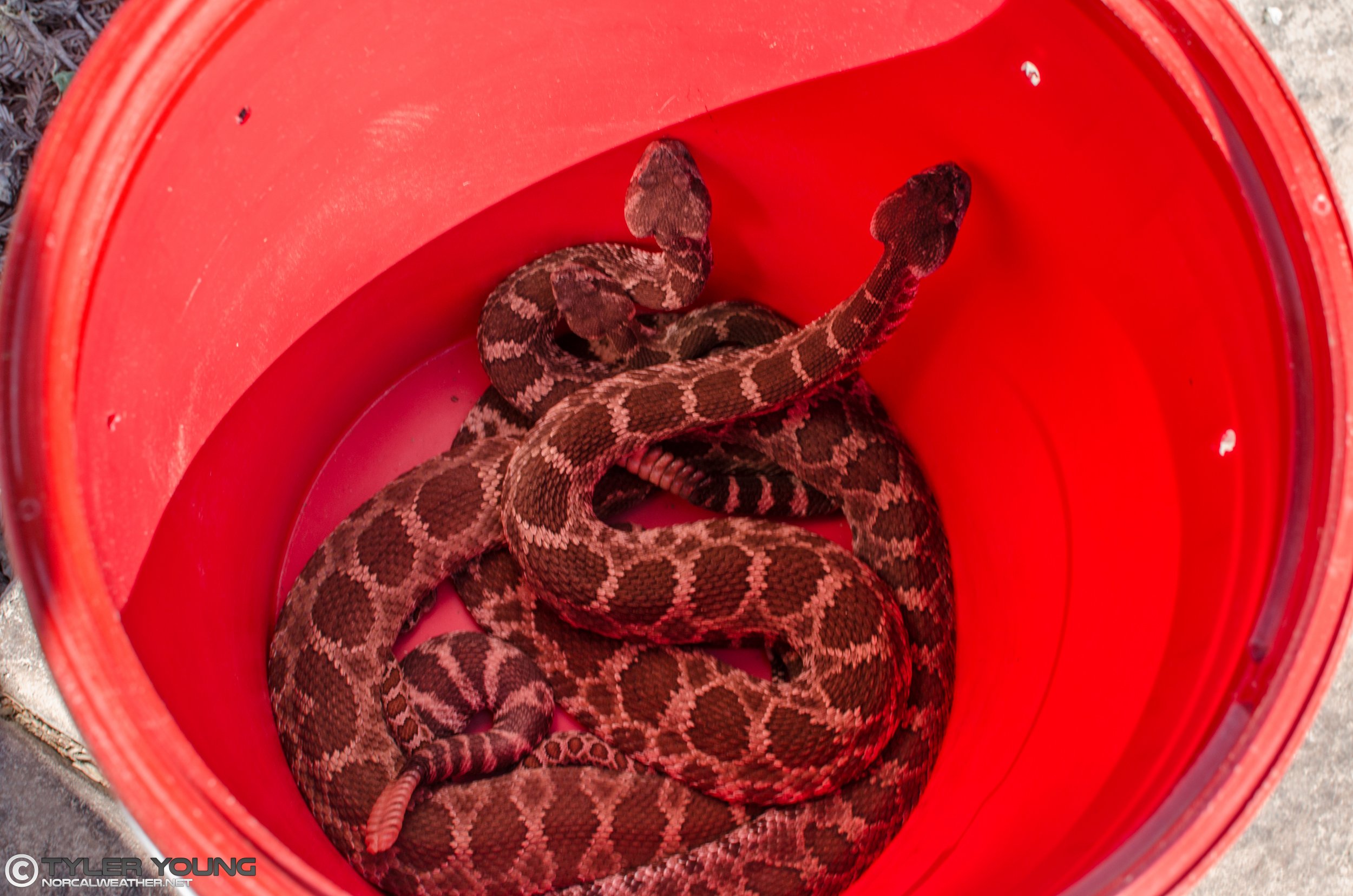 Four rattlesnakes removed from a wood pile inside a barn in Granite Bay. The four consist of three adults and one little juvenile.

On that freezing note, something I’d like to point out is that this winter was quite warm, and once again abnormally dry despite a couple of periods of very wet weather. The lack of very cold temperatures increases the potential of more snakes surviving the winter, and the lack of long-duration wet spells likely allowed most dens to remain fairly dry, also supporting the likelihood of additional snakes surviving the winter. With that said, though, rattlesnakes are pretty picky when it comes to den sites. They try to head back to the same one at the end of every season, as they know it’s kept them alive in previous years, and those previous years likely had some spells of rough winter weather. It’s when a habitat is destroyed, e.g. people developing new housing complexes or commercial sites, when dens are demolished and snakes are left to try and find a new den before the winter season takes over. That task can be hard for a snake, become sometimes, in some regions, snakes will travel a fairly significant distance (perhaps a mile, or even a few) to a den they know will suite them for the winter; but if that den is gone, the struggle becomes real.

One year temperature anomalies from March 11th of 2014 to March 10th of 2015. Much of the state has been above average through the duration of the year.

Looking forward to this snake season, it’s hard to say if it will be any different from years past population wise. The multi-year drought likely is having an impact on the population and health of snakes, but it isn’t just snakes that deal with the drought. The entire ecosystem suffers from drought. Less or no water in places it normally is can cause all sorts of problems, including less small rodents for not only snakes to prey upon, but the same goes for other predators such as hawks, foxes, coyotes, and so on. This leads to desperation in all of these animals to try and find food and water, and the easiest place to find both of these is in human-populated areas, where water is more abundant and rodents tend to thrive. As I’m sure many have heard quite often, it’s certainly not the animals fault for wandering into more urban locations. We, humans, must understand that it isn’t just us that suffers from drought (and yes, climate change), and we’ve got to come with terms that it may not be too out of the ordinary to bump into one or a few of these wild animals when they’re most active in the warmer months. Most mammals and birds have better odds at surviving a run-in with people, as most people don’t run out with a shovel and behead or take care of them with some other medieval practice as a lot of people still do with snakes, all over the idea that they think this snake is there with a direct mission to bite or hurt them. As I have plastered on plenty of locations here on the site, they aren’t. They’re there because they’re hungry, thirsty, or just need a place to sit tight for a bit until it’s good for them to continue onward with their travels.

It’s hard to convince someone who is used to killing the rattlesnakes they run into every time to go the humane route It’s not impossible though. My grandfather, for instance, moved here to Rocklin in the 70s, and he used to be on that boat with the mindset that they’re waiting around are there to get you, and did indeed kill them. However, I’ve been working with snakes for a good chunk of my life now, and over the last several years he’s come to see that they certainly aren’t what he was told and thought they were to be and doesn’t kill them anymore (that is made easy because there’s snake equipment literally all across the house during the season), however the number of run-ins he has is significantly lower now because most of Rocklin has become quite urban, and most of the habitat has been demolished – taking a lot of snakes out in the process. The same goes for a lot of east side of the valley adjacent to Sacramento and the nearby foothills.

So, since I’ve posted this early in the season, hopefully before people who regularly run into rattlesnakes each warm season do, if you didn’t know rattlesnake removal services existed or just haven’t seen the need, perhaps give it a shot this year? There’s plenty of services in our region that do it, including me. I’m certainly not trying to steal “business” away from other companies, I just want to (hopefully) increase the number of snakes that are successfully relocated each year, bring awareness to people, answer questions people have about snakes, and of course work with these awesome reptiles. And let’s be honest: it’s always a thrill to work with a rattlesnake.