Home / Rattlesnake behavior / What Kind of Weather Do Snakes Like?

Have you ever questioned what sort of weather snakes enjoy? If not, don’t worry: it probably isn’t on the top of everyone’s mind. That said, it’s probably a question that once brought up most of us would find interesting — and today you’ll figure out what type of weather our shy scaled neighbors find most suitable for their activities.

Chances are, you aren’t a fan of being outside when it’s around 90°F +. This goes for most other animals as well, including snakes. For snakes, their activity happens most prominently between temperatures of 68 and 80 degrees for the most part. Snakes can be active for short times in temperatures higher and lower than that, but not for an extended period of time. Generally, the way I put it is if the temperature is comfortable for people to be outside in the sun for 10 or 15 minutes, chances are the snakes are enjoying it as well. It’s a common misconception that snakes love heat, when in fact it can prove deadly for a snake to be caught in the sun in mere minutes. 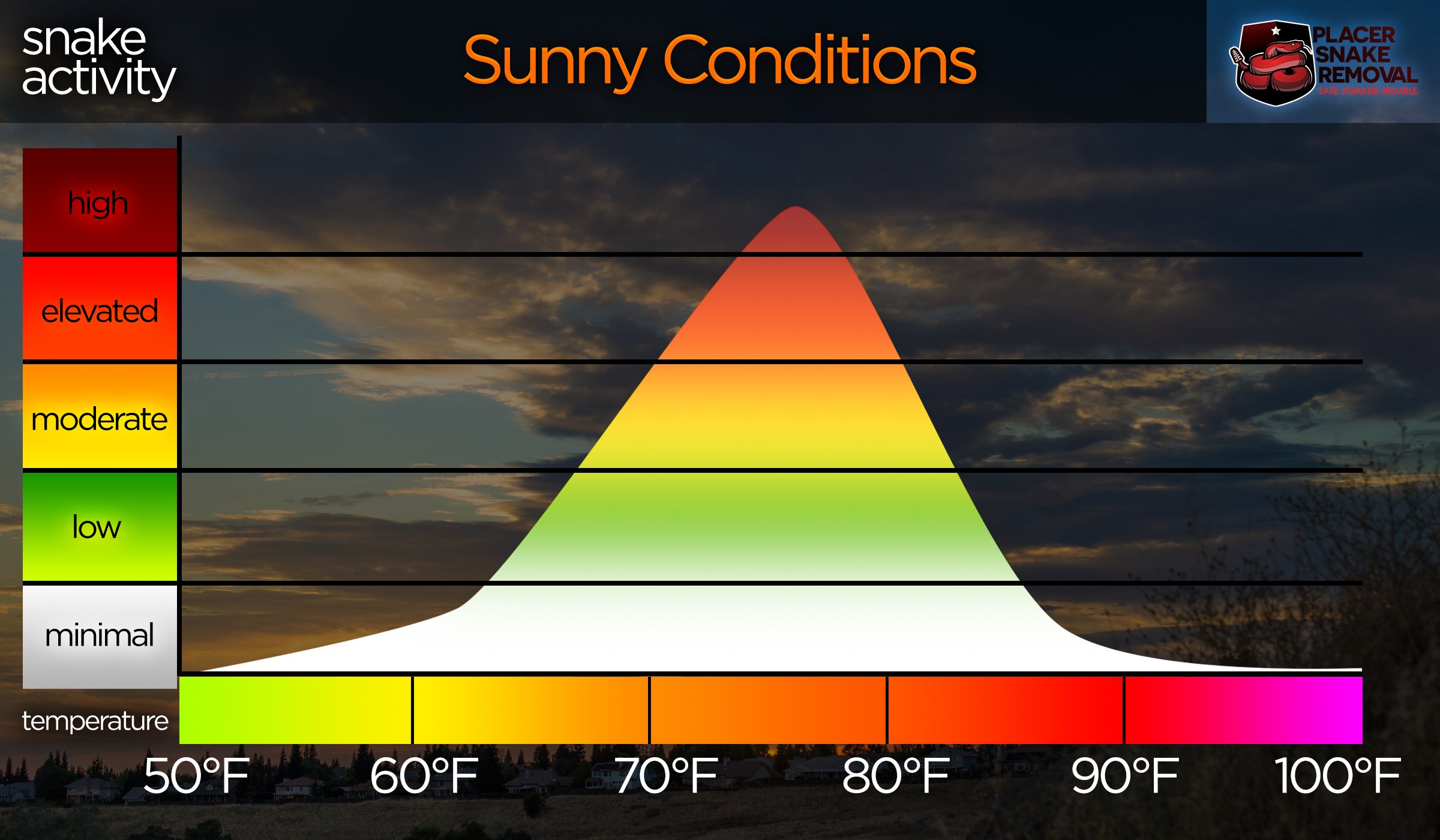 A graph visualizing how temperature affects snake activity on a sunny day, with a peak in activity in the 70s generally.

Aside from temperature, there are other factors that play into their activity that are just as impactful as the temperature itself. During the mid to late-summer, northern California begins to see waves of monsoonal moisture and clouds from the south and southeast. Occasionally, these monsoonal moisture surges are potent enough to even generate some rain and/or thunderstorms across the region. The clouds themselves can reduce the temperature a bit, and more importantly, block direct sunlight from beating down on anything under the cloud cover. This can cause significant snake activity quite possible in temperatures over 80 degrees, especially if the clouds are fairly dense and not just high clouds.

Additionally, the rain occasionally dumped from monsoon showers and thunderstorms can draw snakes out to drink it up. After all, it isn’t every day that the sky gives you easy hydration during a usually rather hot northern Californian summer. After a big summer rain, snake activity has been noted to spike at least modestly in the days following — likely due to lower and more favorable temperatures and increased activity by just about any other animal taking advantage of the break in the typical summer heat, including the snakes prey. It could also be due to the snakes being more hydrated and more comfortable moving around to different spots to hangout or hunt with a lower risk of dehydration or rapid overheating. 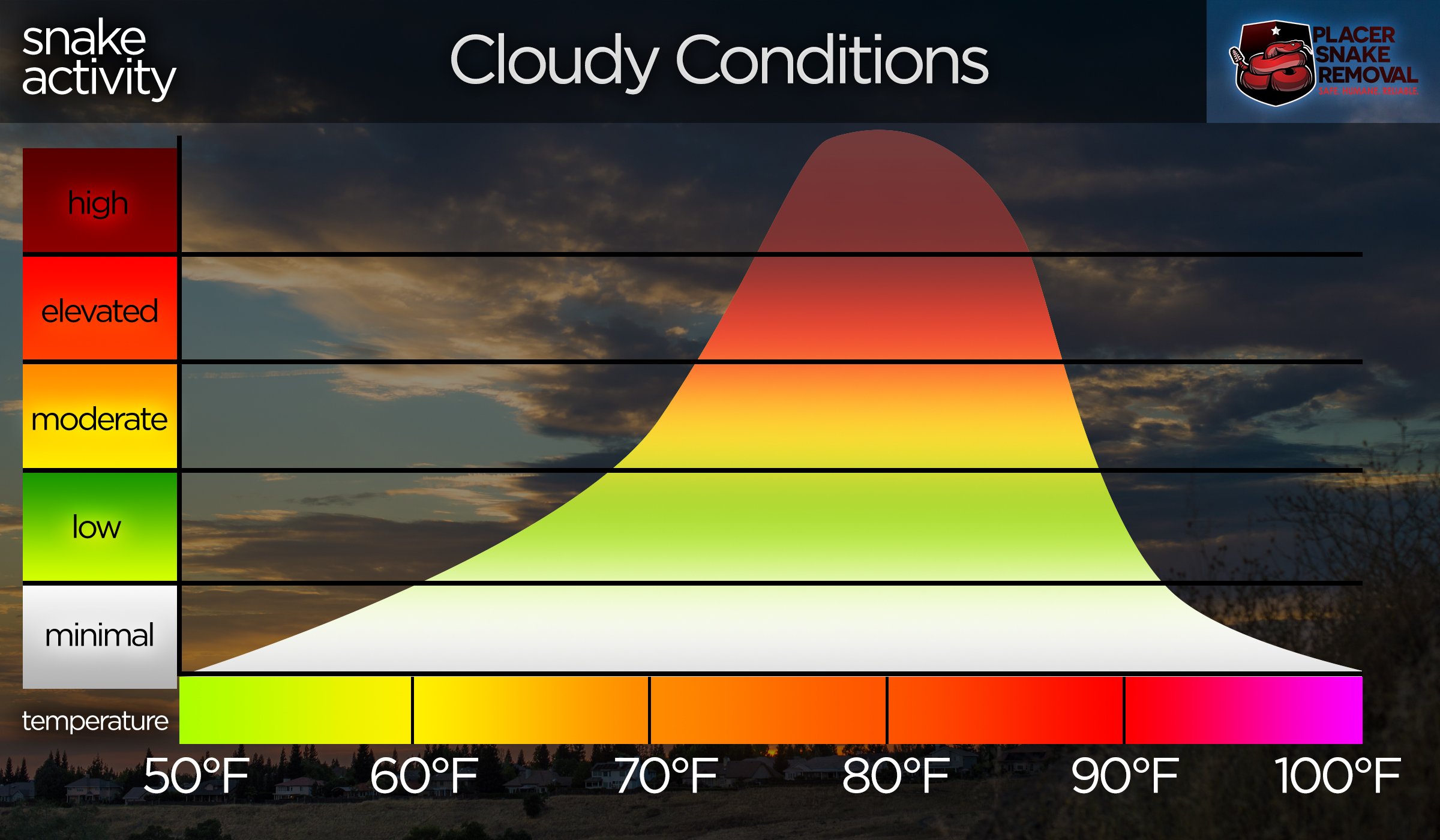 A graph visualizing snake activity on a cloudy day, extending the maximum temperature range from the 70s to the mid-80s.

Over the last 9 years of photographing snakes and documenting behavior, I’ve noticed that the more interesting the weather is in terms of clouds & rain during our warm season, the more interesting snake behavior becomes. And over the last 7 years of operating Placer Snake Removal, I’ve noticed the hotline receives significantly more calls for service during times of cloudy, showery summer weather.

How to Deter Rattlesnakes