The past several years have been plagued with critical drought across California, as we’ve all heard and been told over and over. What you may not hear as often is what impacts drought has — not just on our precious water supply, but on the environment as a whole in which we reside in. Everything from soil quality, plant and tree heath, to wildlife health and populations are affected by drought and any climactic/meteorological anomaly. While one year of drought, while still impactful, could be be considered insignificant compared to the streak of about 3 years of drought we’ve endured. These years have put our ecosystem on-edge, and has likely impacted our wildlife population in ways we may not immediately realize. Drought leads to sparse food and water availability for rodents and insects, the major food source for reptiles large and small. Here, we’ll focus on snakes and the impact drought has on them, and how a wetter water year may impact them.

3 year precipitation averages for the state of California. While precipitation for the water year of 2015 – 2016 is much closer to average in northern California, the the year average suggests we’d have a long way to go to bring us up from the previous years of drought.

After a couple years of drought, rodents become more desperate for food and water and will more commonly begin moving into nearby human-inhabited areas, where we just so happen to water our lawns and surround ourselves with things rodents will eat. Gardens, trash, pet food – all typically easy to find for a rodent in a neighborhood. Instead of making daily stops in the neighborhood for food and water from wherever the rodent(s) may reside, they may end up moving and living in the neighborhood due to the fact everything they need is right there. This creates a problem for the major predator of rodents: snakes. Once these rodents move off into the neighborhoods, the snakes will get hungry and have to follow suite into the neighborhood to scout and hunt for these pesky rodents who figured out where their food and water is. This leads to increased run-ins with people, and thus increased snake mortality given most people act by killing them, while the rodents are nearly invisible and could continue to increase in numbers. Aside from human run-ins, not all snakes will find where their food went, leading to increased disease and hunger mortality, something that occurs with basically all animals during drought. Even the rodents, as not all of them will figure out what to do.

Once a wetter year comes up, it begins to replenish dwindling food and water sources for local ecosystems, but previous drought streaks can alter environments quite a bit to the point where it may take years to recover. For instance, once animals move and adapt to drought, a wet year may not do a whole lot to change their behavior. Sure, food and water may become more abundant, but they may remain where they know food exists: closer to humans. Wetter years will help keep wildlife populations higher in itself, but could lead to increased run-ins with people down the road as more animals survive the summer, reproduce, and carry onto the following year. Wetter winter seasons support the growth of more vegetation and keep it alive longer, and due to the fact vegetation helps snakes remain secretive and covered, an increase in vegetation from a wetter year may in fact coax snakes into wandering around more. Drier years lead to faster vegetation death, thus making snakes perhaps feel less safe and comfortable to wander very far outside their home territory in search of whatever it may be they’re seeking (i.e. food or a mate). In short, during wetter years, you may find snakes out wandering later in the season compared to dry years. In dry years, snakes may do much of their wandering in the early to mid-spring, before vegetation dries and visibility becomes better (not good for secretive snakes).

Awakening from the long nap

Drought years – especially 2015, aren’t always just dry, they can get warm fast as strong ridging builds in earlier than normal. So warm that, in fact, rattlesnakes began to emerge from their dens in early February as temperatures rose into the 70s. This is something that generally happens between late February and late March, depending on how the late-winter season progresses meteorologically. The longer the pattern remains stormy and cool, the longer rattlesnakes are confined to their dens. The faster the season winds down, or at least large breaks occur between storms, the faster snakes can begin to awaken. For instance, even in a wet year, a warm break that lasts a week or two between storms could be enough to coax out some snakes from their dens to greet that warm ball of light in the sky for the first time in months. I know I’d be eager to warm up and stretch after being confined under a boulder for what may be 2 – 4 months. I’m sure I’d also be quite hungry at that point, but that’s something snakes excel at. Some snakes, if healthy, can go 6 months to even perhaps a year without eating. In most cases, the snakes find food within an acceptable period of time after beginning to hunt, but in those extreme cases they’re capable of holding out. 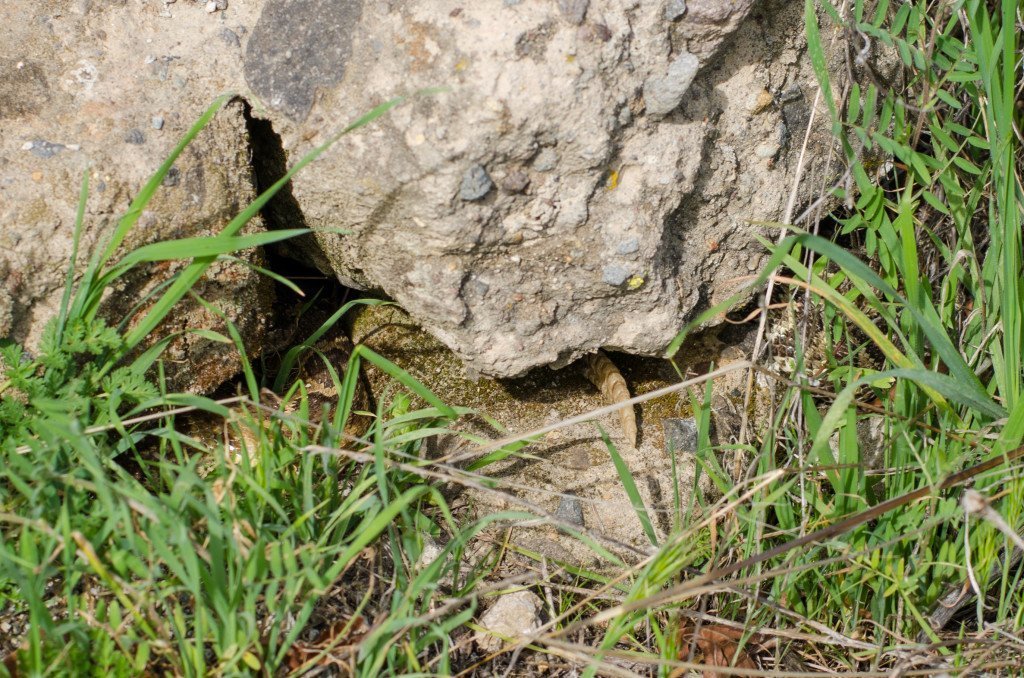 If you look closely, you’ll notice two rattlesnakes outside this denning rock. These two popped out in early February of 2015.

Springtime is one of the most active and interesting times for snakes, as they become very active during warm spells seeking mates and meals, both of which they haven’t seen since last year.