Snakes are perhaps one of the most disliked, hated, and unnecessarily pursued animals on this planet. As someone who used to dislike the animals myself when I was young – I can understand the fear behind their strange movements and seemingly unpredictable behavior. However, over time I grew interested in these animals around the same time I took up photography as a hobby. This coexistence of interests led to me facing the vague fear of these animals to photograph them in their own environment, leading to a realization that much of what I was taught and told about snakes — rattlesnakes especially — was nonsense.

When you study and work around rattlesnakes in their own environment in a pile of rocks surrounded by awfully prickly star thistle that has ruined countless socks, you learn that these animals actually live very peaceful & quiet lives. A herpetological (study of reptiles & amphibians) photographer who wants what we call “in-situ” photos of a snake, which to someone who hasn’t dabbled in photography too deeply stands for “in its original place”, means slowly approaching a snake where it rests to grab some photos of it where it found itself. This is contrary to lots of photos of snakes you’ll see elsewhere – snakes perched up in defensive posture, making them look perhaps more menacing when in fact the snake is just worried about the person towering over it, which presumably in the snakes mind means you’re there to kill or eat it. 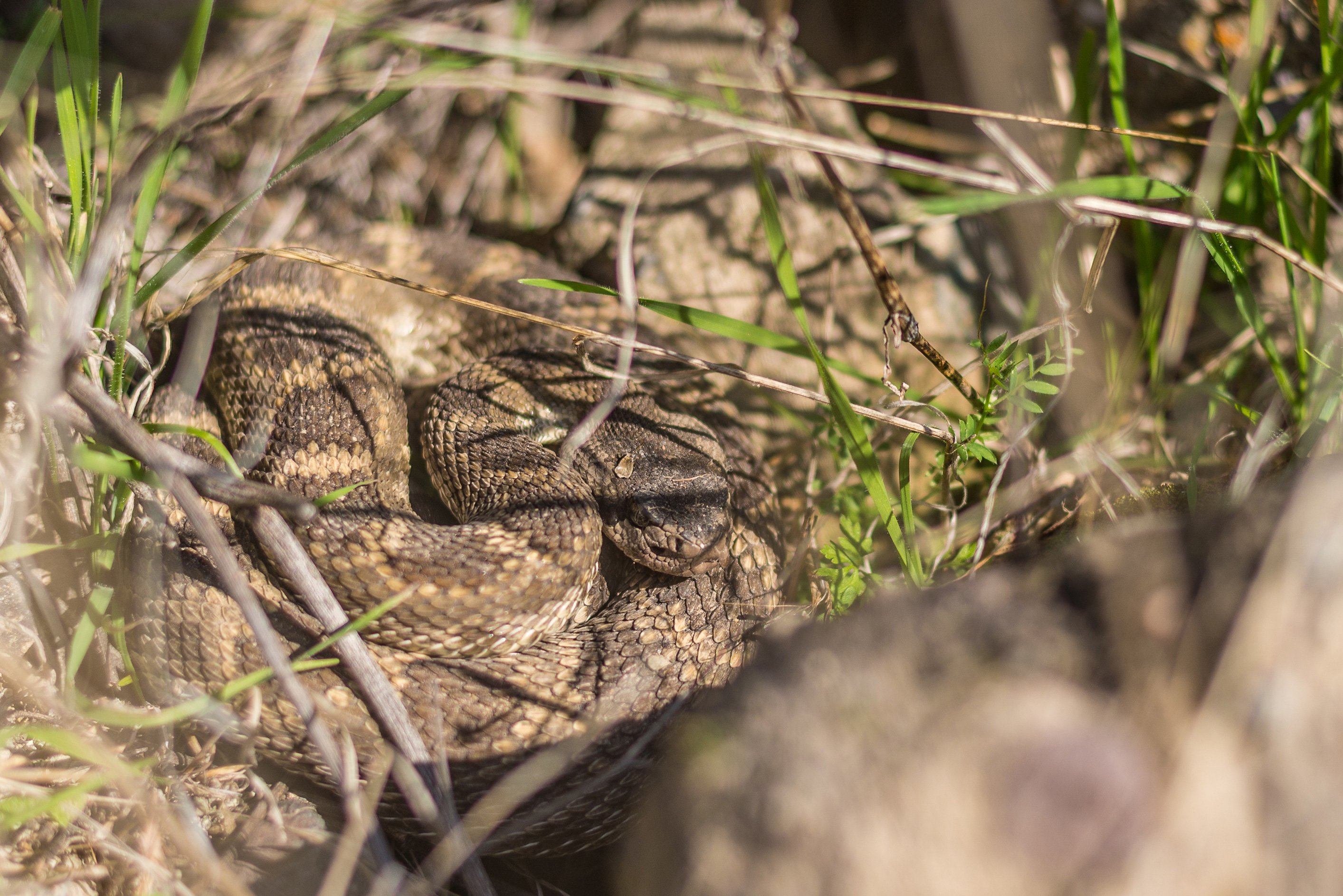 A rattlesnake I’ve been tracking for 4 years at a den, enjoying a late winter afternoon in the sun.

With all that out of the way to even the playing field a little, what will follow are some of the most common myths and misconstrued bits of information that get around and are often taken as fact.

This is the farthest from the truth chunk of information everyone has likely heard a story about. Snakes will not chase you. We’re 10, 20, 30, even 50 times bigger than snakes mass-wise, at least in regard to snakes in the U.S., so why would a relatively small animal want to chase something it knows poses a major threat? If you spook a snake and rile it up causing it to move and then you stop moving, there is a chance that the snake will loose track of where you are and by chance crawl in your direction. This happens quite a bit, and is most likely the cause to the “a snake chased me” story.

This is something that crops up every year as well, and it’s a false fact. The logic of this false fact is this: a baby rattlesnake is more dangerous than an adult because it cannot control it’s venom. This is not true. Studies show babies can indeed control their venom yield, immediately busting this myth. Studies also suggest that a bite from an adult can be much more worrisome depending on the specific incident due to the larger quantity of venom that can be injected compared to a baby.

One of the more tricky common misconstrued statements out there. To begin deflating this balloon, we’ll begin right off the bat with the core of this statement: snakes don’t travel with buddies. This is aside from a male trying to find a mate in the spring, but the male and female won’t go anywhere together after they do their business.

Another side to this statement is where there’s one baby rattlesnake, there’s another. Birthing season is in the late summer and early fall, and babies stick near mom for 1 – 3 weeks. After that, they leave. So, if you are in very close proximity to where mom gave birth, you could have a handful of babies in the area – but they won’t travel together. They’ll essentially scatter.

4). Rattlesnakes get 1 new button a year

This is the myth that blows most people away because it’s so commonly accepted! Rattlesnakes can actually shed multiple times a year, depending on the age of the snake, the health of the animal, and other environmental factors. Even a newborn rattlesnake will in fact shed several times within its first 1 – 2 months of life! Additionally, a rattlesnake’s rattles can break off if it’s crawling through some rugged rocks or if another critter grabs its tail.

A sub-myth to this is that baby rattlesnakes don’t have a rattle at the end of their tail. This is false. Babies are born with a button, albeit a very quiet button. After a shed or two it’ll gain some volume, though.

The easiest one to dispel here. Rattlesnakes give live birth, so those eggs you found are either a birds eggs, or a non-venomous snakes’ eggs.

Snakes are not slugs. Their skin is dry, and the texture can either be smooth or a little rugged if the snake has keeled scales.

7). The only good snake is a dead one

The final piece of information I’ll tackle here – and it’s by far the most troublesome phrase. Generally, you’ll hear this from someone who is either has an excessive fear or phobia of these animals, or someone who thinks it makes them look tough to kill animals a tiny fraction of their size. I can’t help those in the latter, but for those who are afraid of these animals – I say this: snakes are scared of anything bigger than them, and the list of things bigger than them is far longer than any receipt you’ll ever leave CVS with. The list of animals bigger than us that we’re afraid of is a drop in the bucket compared to what smaller animals have to worry about.

Snakes will go the opposite direction no matter how much you love or hate them. Our choice to kill them on sight is a major disservice to the ecosystem, and the impact of having less rodent-consuming animals has impacts that lead to a whole web of secondary issues. If you chose to move to or visit an area that has an existing snake population – learning how to work with or around them is always better than responding with a garden tool or shotgun.

Upwards of 100 people die to bee stings each year, while 5 may die a year to a snake bite. We aren’t trying to eradicate the bees because bees occasionally think we pose a threat to their hive — we’re trying to save them, because they provide an essential ecological service. Snakes? Fewer people die a year to snake bites, and we go out of our way to kill them — and they too provide an essential ecological service.