Rock retaining walls have become a widespread landscape choice for builders and homeowners that have a steep slope in their yard and need something to do with it. After all, it’s fairly simple, just cut into the hill in front of where you want your wall to go, flatten it as you want it, and get a rock wall builder out there and they’ll make that wall of dirt separating the higher piece of property from the lower with a wall of rock instead.

Depending on where you live, the rock wall could be a good choice. If build right they’ll limit erosion of dirt and last for a heck of a long time. But if you live in a sub-urban area, you know, where snakes are still present, they’d love to use your rock wall as a apartment complex. If your wall is large enough to use large rocks and extends back a few (or several) feet, they could even use that rock wall as a den through the winter. Folsom and El Dorado Hills have huge amounts of these rock walls, and along with that lots and lots of snakes, especially rattlesnakes, since rocks are number one on their list of natural things to hide under or near. El Dorado Hills and Folsom aren’t alone though when it comes to rock walls, we go out to many calls in parts of Lincoln, Granite Bay, Rocklin, and Loomis in which rattlesnakes have inhabited these rock retaining walls.

Google Maps’ Street View is always helpful to locate areas with rock walls. This area stuck out the most in El Dorado Hills, though it’s now nearly fully developed with houses.

These rock walls don’t only shelter the snakes, they can also keep them fed well. Rodents and smaller reptiles (lizards) will also be lured in by the easy shelter rock walls make, which is essentially food service for snakes also inhabiting the rock walls. Rattlesnakes are experts when it comes to finding a safe shelter, but when shelter and prey items meet up in the same place, it becomes a rattlesnakes paradise – given hunting typically takes places in more open or higher-risk areas. 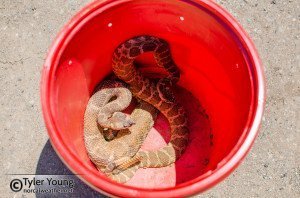 A pair of adult rattlesnakes removed from rock walls in El Dorado Hills.

It can be pretty tough to remove all of the snakes in a rock wall in any given amount of visits as well. We could remove a bucket of rattlesnakes from rock walls at a single client’s house, but can’t rule out more hiding out very deep in the wall that simply aren’t visible, let alone catch-able. We’re asked frequently if there’s anything the home/property owners can do to keep more snakes from headed into the rock walls, and really there isn’t an easy solution. If your yard if fenced off already, you could get some snake fencing (fine mesh) installed along your existing fence, but even in that case there is always the chance snakes could find even the smallest gap in the fencing and head on into the yard. If installed decently though, it should be tough for a snake to find its way past the mesh. Once the yard containing the rock walls is sealed off from new snakes trying to crawl in and make use of the apartment complex luring them, then it becomes much more efficient for me to come on out and remove leftover rattlesnakes in the rocks. 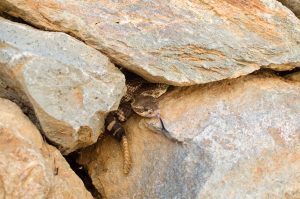 A large female rattlesnake hanging out in a large rock retaining wall in an El Dorado Hills front yard.

The takeaway from this? 1). if you can, avoid building a rock retaining wall if you’re still in the building process. 2)., if a retaining wall already exists: carefully inspect it. Sometimes a nearby rock wall can draw snakes away from others. 3). learn how to adapt your yard around any problematic rock walls – limiting dense bushes and other items nearby.

The Photography of Rattlesnakes