In 2019, Placer Snake Removal changed the way information about rattlesnake removal service calls is collected to add a few new details to each and every rattlesnake encounter and subsequent removal. While years of working with snakes in a variety of different habitat types and conditions helps create a fairly accurate mold of ideal times to maximize potential success of finding rattlesnakes on the properties we work on, an analysis of the conditions across hundreds of rattlesnake captures paints this picture visually. Additionally, it helps map out the numbers of adults and young rattlesnakes we work with as well throughout a year — which both seem to have slightly different behaviors at different temperatures.

Of the total sum of rattlesnakes we removed, just over 40% were neonates or juveniles between days or weeks old (while birthing season is active between August and October), to about a year to a year and a half old. The other 60% were adults 2 to 3 years of age or older. Generally speaking, the gap between a rattlesnakes second and third year of life could be considered a sub-adult stage, as females are likely capable of breeding at about 3 years of age. That said, it could be partially subjective to gauge the age of a rattlesnake larger than a typical yearling but smaller than a seemingly full-sized adult. Thus, separating it two ways should keep things easier to work with in the end.

The first analysis of data doesn’t differentiate just yet between approximate age of the rattlesnakes we worked with. It simply takes any and all rattlesnake encounters and removals by us and places each incident into temperature brackets that are 5 degrees each ranging from the lowest point we removed a rattlesnake (51 degrees), to the hottest temperature a rattlesnake was encountered & removed at (102 degrees). 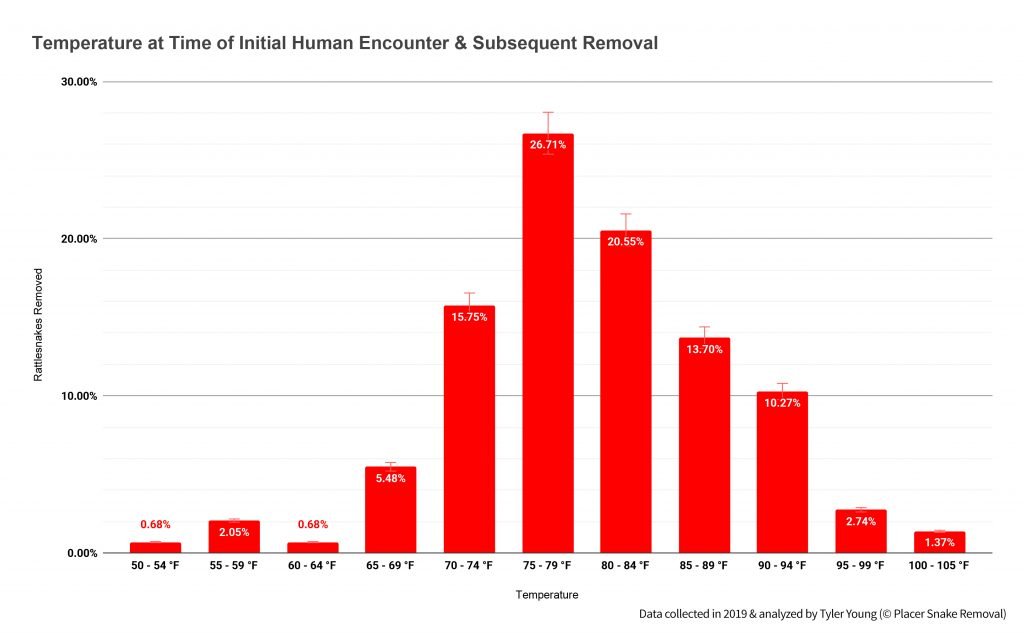 Interestingly enough for those who don’t recall how strange Spring of 2019 was weather-wise across California, the rattlesnakes removed in temperatures between 55 and 65 occurred in mid-May, after many rattlesnakes were removed in March and April as temperatures surged into the upper 70s and 80s before the locally historically-wet May arrived. Through the rest of the season, temperatures proceeded to return to fairly normal northern California-summer ranges.

Something I’ve always told people about snakes and heat is something along the lines of ‘if it’s comfortable outside for people, it’s probably comfortable outside for snakes’ — and the visualized graph above helps perfectly illustrate that fact. Well over half of the rattlesnakes we removed last year (and presumably most other previous years) were out when surface temperatures were at their most comfortable, generally speaking. The temperature block in which we removed the most rattlesnakes was in the mid to upper-70s, with the second most popular time being when temperatures are in the low to mid-80s. Activity tapers off the warmer it gets, as it does when temperatures decline below 70.

Whacky fun fact: the minimum-maximum temperature at time of rattlesnake removals/encounters creates a spread of 51 degrees! 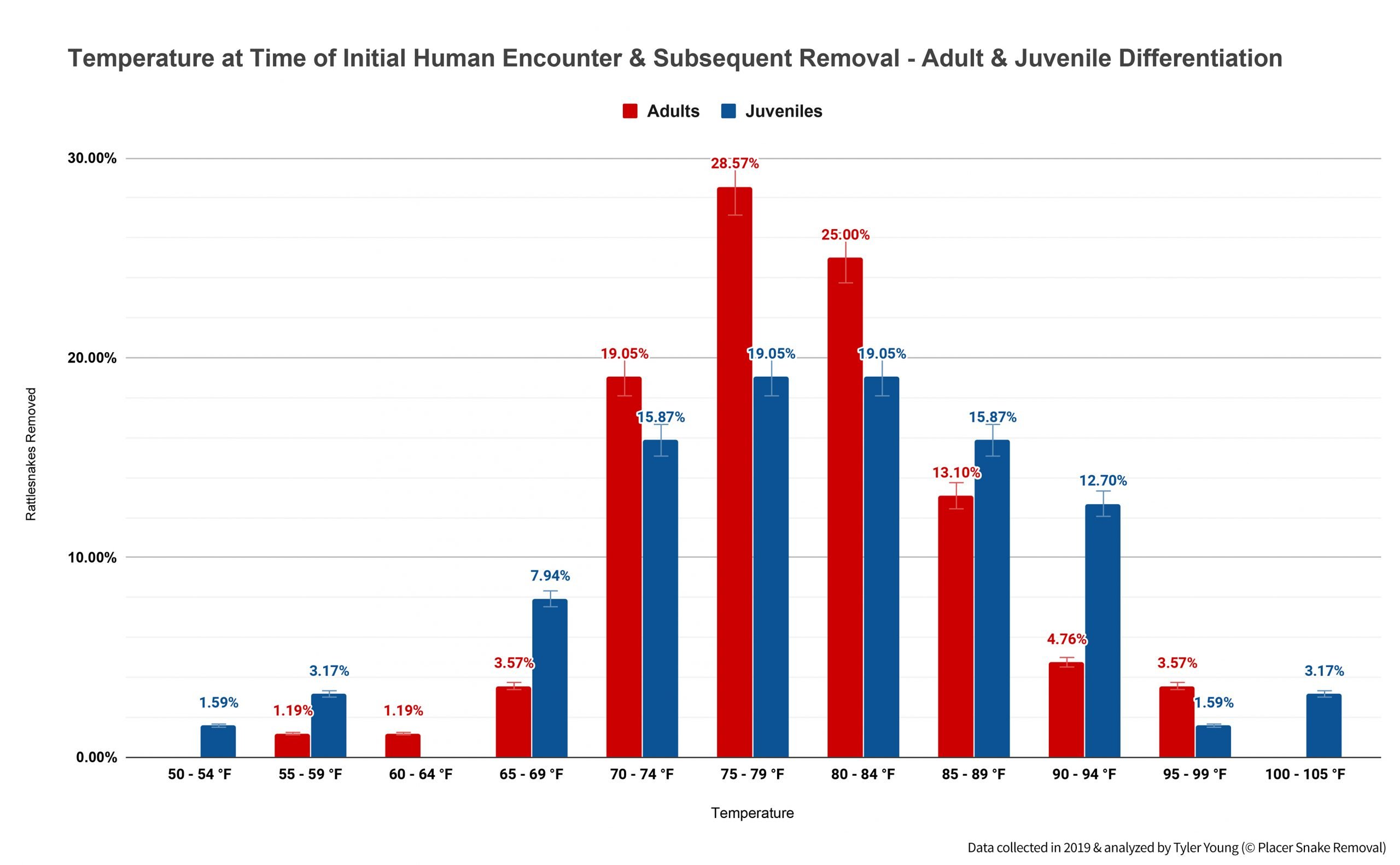 When the age of the snakes we worked with is taken into account and differentiated from one-another, it suggests a few interesting things. First, adults show a rapid upward trend of encounters & removals once temperatures breach the 70s. Juveniles see a quick rise in activity too, but it is a tad bit more tapered — but also could simply be 2019’s data by chance. Something likely not up to chance is that juveniles have a slower encounter falloff when temperatures heat up beyond the mid-80s. Adult encounters and removals drop rather rapidly when the heat ramps up. This could be due to a few different factors. One, being adults are better at navigation during the warm season and arrive at a place to shelter during the hottest periods of the summer. Or, two, being that birthing season late in the summer leaves young rattlesnakes leaving rookeries during less-than ideal weather.

Juveniles still appear to be most likely to be active when temperatures are moderate as were their older counterparts, but their numbers plateau out and drop slower compared to adults who’s activity levels drops more than 20% over the course of less than 10 degrees of increasing warmth. That said, however, a sharp decline in encounters of juvenile rattlesnakes was noted when temperatures got out of the low-90s and rose into the upper-90s, the sharpest point juveniles saw a decline in 2019’s data.

In short, 2019’s data suggests the majority of rattlesnake-human encounters occur when temperatures are between 70 – 85 degrees. This also happens to be when people are also most likely to be outside — which could partially explain some of this data. If more people are outside in this temperature range, there would be — purely by chance, a general increase in encounters with reptiles and a decent list of other wildlife. There are at least some pieces of evidence that it’s not purely due to the higher levels of human activity though, as folks like myself who spend free time out in the field seeking snakes for photographic/personal record keeping, find rattlesnakes out and about quite a bit more often in the aforementioned temperature range.

How The Coronavirus Pandemic Could (Indirectly) Impact Snakes